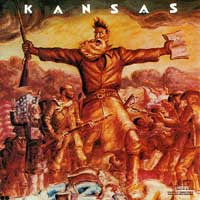 About the album artwork: "The first album cover is from the Topeka State Capitol and is the mural that is painted inside on the wall by John Steuart Curry of John Brown. I remember seeing that when I was 15 or 16 years old, when I went to the Capitol, and thinking, “If I ever get a chance to make a record, then that is going to be the album cover.” Little did I know that seven years later, CBS would be contacting the Topeka Capital Building to license the image for our album cover. It was a heck of a cover. The band was named Kansas, and that kind of said it all. We started with a good cover, and, for the most part, our covers have always been good. We didn’t have our logo yet. If you look at the first album, it just has little cutout letters and it is the worst artwork known to man, other than the John Brown painting. We had no input other than the cover of the John Brown painting; at least we got that!" 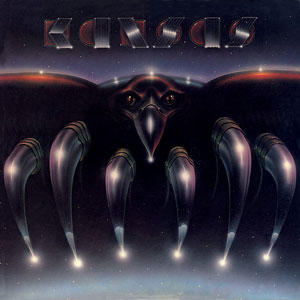 About the album artwork: “The artist Peter Lloyd did that cover. Lloyd also came up with our logo on Song For America. On the back it is just a, ‘Hi, we’re a band” photo, but on the front, Peter did a great job, both with the cover and that logo. In one of our first reviews of the album someone called the cover a “stylized crab,” we about fell out of our chairs. We were like, “Look, here is a review of our album.” It talked about all of the long songs and the progressive nature of the music and then it said, “The album is also highlighted by a progressive crab by Peter Lloyd.” We were like, “A crab? How could they not recognize it is an eagle?” It was funny. It is that kind of stuff that makes a great story.” 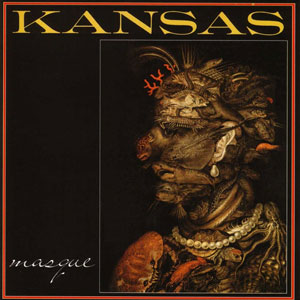 About the album artwork: “That was a painting that CBS wanted us to use. Kerry came up with the title. We were so rushed between ‘Song for America’ and ‘Masque;’ between making the albums and touring, CBS just got the painting and the pictures on the back and we said, “Okay, cool, put it on the cover.” It is probably our darkest album cover. The pictures of us on the back are very dark. It was quickly thrown together because we were so busy; we were just working our asses off. What is interesting is that on ‘Masque’ we didn’t use the logo. We were just so rushed that we didn’t think about it." 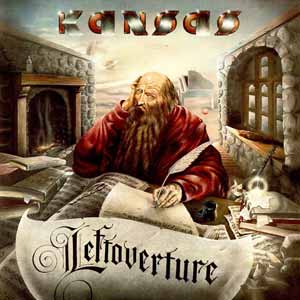 Carry On Wayward Son The Wall

About the album artwork: "Artists were starting to submit artwork to us by this time. We would look at different paintings and we thought that the old man was really cool. We had the name “Leftoverture” already. The song “Magnum Opus” was originally going to be called “Leftoverture” but it was such a great name we said, “Screw it, let’s call the album that.” It worked. “Magnum Opus” became the title of the song. Dave McMacken submitted that and we thought it was really cool. He invented the old man and the toilet paper — somebody actually said that it looked like toilet paper on the cover. First a crab and now toilet paper…" 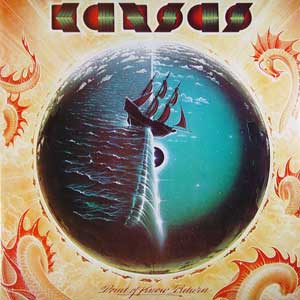 Dust in the Wind Hopelessly Human

About the album artwork: "We went back to Peter Lloyd for this one. It is the most iconic cover for Kansas; in fact, it is one of the most iconic for anybody. He really stylized our logo and put the dragons on the side. We gave him some ideas as “Point of Know Return” was the name of the song. Kerry and I had knocked around the idea of something going over the edge of something. We wanted to show something that had passed the point of no return. We gave him the parameters, but when he submitted that, we were stunned, as it was unbelievable. When you turn it over, you’ve got all of the artwork on the back. We had the drawings of each guy on the inside. Rich goes, “Is that supposed to be me? That doesn’t look like me.” It was funny.
"The inside was also done well. A gentleman named Tom Drennon did that. He was our art director. How many bands have there own art director? I didn’t even know we had one until then! Tom became a good friend. He was responsible for the rest of the art. If you open it up and look at the calligraphy and the sexton and all of that ship stuff, that is what he came up with. He worked with us on the next several albums and on our tour programs. He was responsible for a lot of the artwork.
“Point of Know Return” was the first time we had our own label design. If you took the album out and looked at the label, the label matched the album cover design. We just hated that little multi-colored and white label that was the Kirshner label. When we went into negotiate the album cover I told our manager Budd Carr, “See if you can get our own label. We have such cool artwork and then you take it out and see that thing.” Budd said, “I don’t think so. Only Pink Floyd and Barbara Streisand have their own label.” Sure enough, we got it. Budd was also the one who came up with the idea of calling it Point of Know Return, instead of Point of No Return." 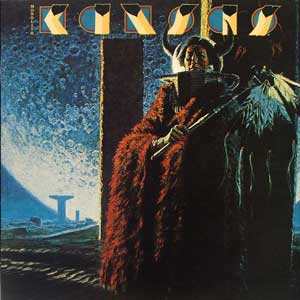 On the Other Side Reason to Be

About the album artwork: "Bruce Wolfe, an artist that did a Levi’s commercial, did that album cover. He had done one of the first animated commercials on television. By the time CBS approached him, he had been doing some album covers. We had sent him the song “People of the South Wind” and he sent back this fricking painting … it was huge. It was not a drawing; it was a real painting of this Indian whose headdress was a space helmet. There were all of these overpasses that were broken and there were a bunch of Indians on the back that looked like they were at a Boy Scout camp or something. He did an incredible job. He took our logo and made it work. It was always a challenge to take that logo and make it look cool. He used the features on it and it really worked. Again, what an icon … it was a 9-foot-tall Native American chief wearing some sort of buffalo robe and a space helmet with horns. The guy must have done a lot of drugs, but we thought it was really cool." 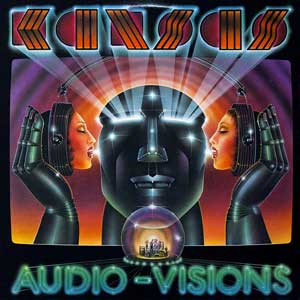 Hold On No One Together

About the album artwork: "This was back to Peter Lloyd again. It looked like a guy putting on a pair of headphones with Cher’s face on them; I thought it looked like Cher. On the back cover there is a guy listening to the record taking off headphones and he looked just like Merle McLain, our lighting guy. Peter did not know Merle, so it was just by accident." 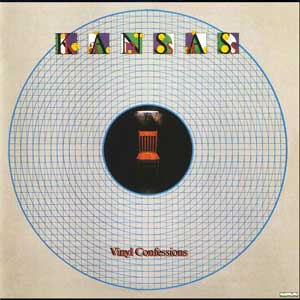 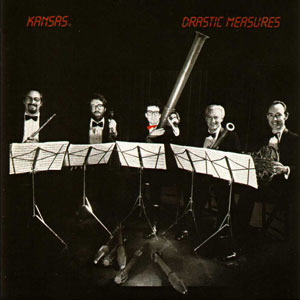 Phil Ehart on the album art: "We used our logo from “Leftoverture” all the way through “Vinyl Confessions.” On “Drastic Measures” we had the smart idea to use something that no one was familiar with. “Let’s shoot ourselves in foot and not use our very identifiable logo. Let’s just not use it.” You could say that everyone was out of gas by then. We were driving a car on empty." 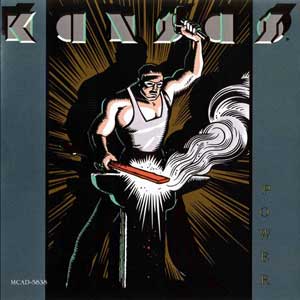 Three Pretenders All I Wanted 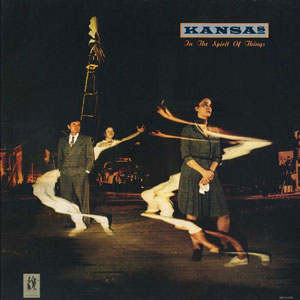 In the Spirit of Things 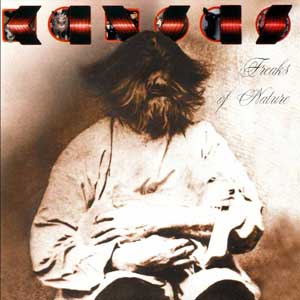 Black Fathom 4 I Can Fly 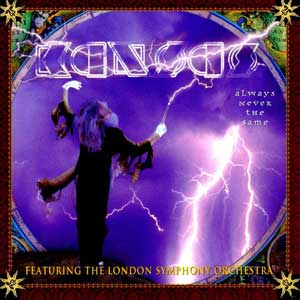 About the album artwork: "I remember that when Kerry Livgren saw the cover to 'Always Never the Same' he said to me, 'That is one of the coolest album packages I have ever seen.' It was supposed to be the old man from 'Leftoverture' conducting the lightning. The graphics were amazing. It was all on CD, so it is a lot smaller and harder to see." 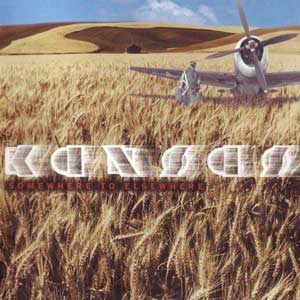 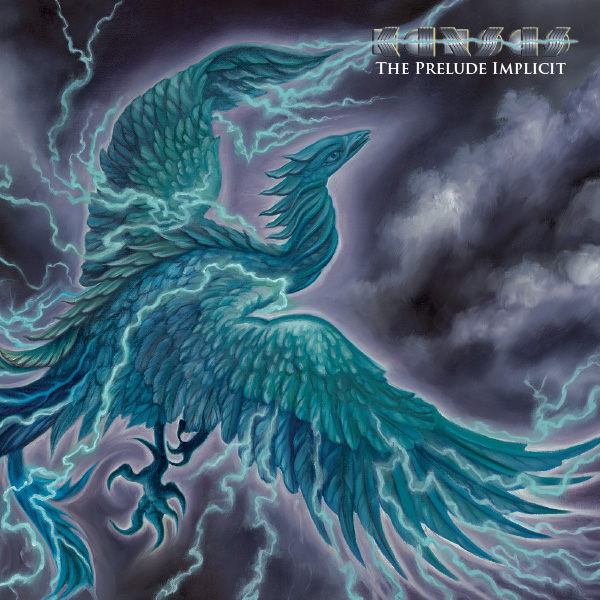 With This Heart Visibility Zero

2020
The Absence of Presence 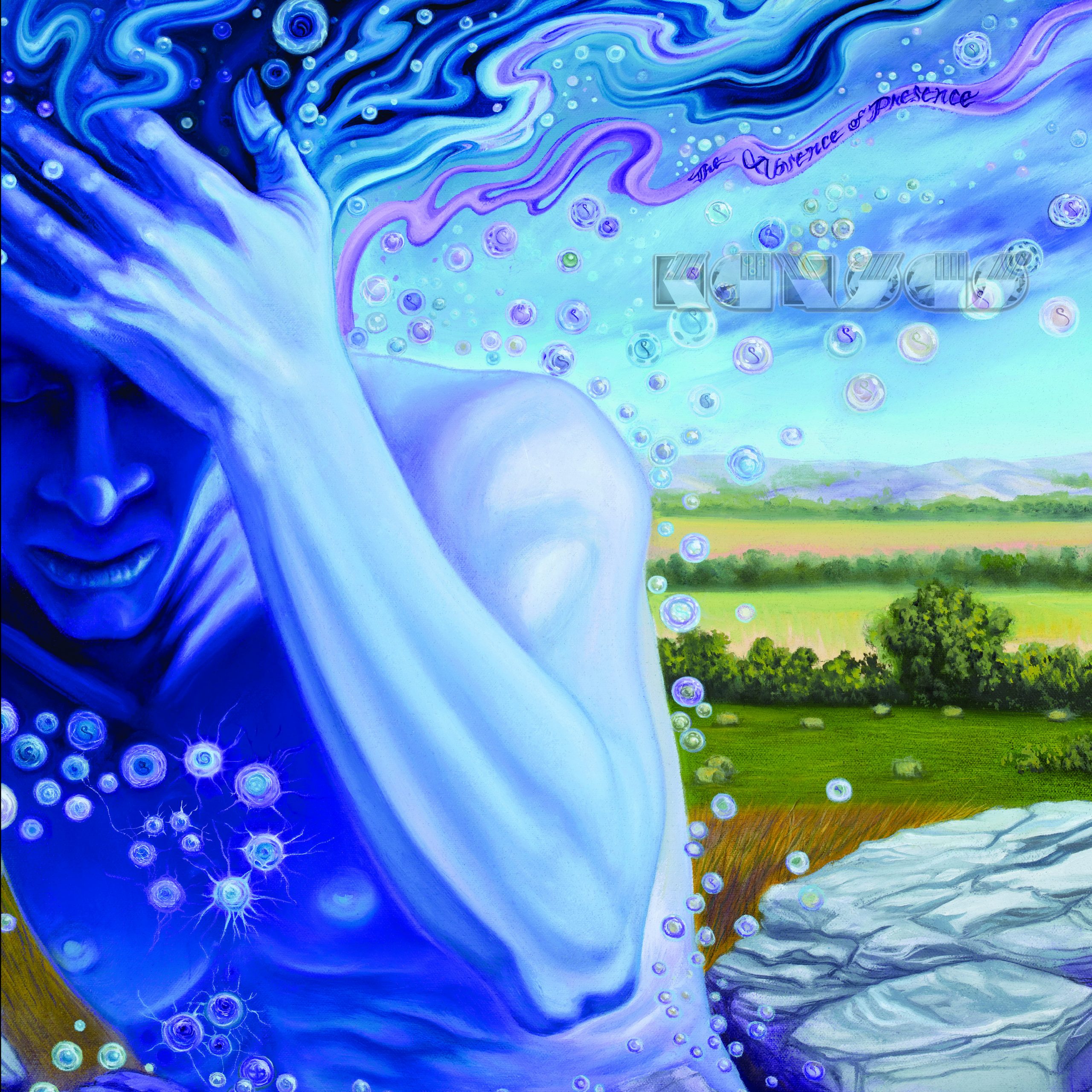 The Absence of Presence 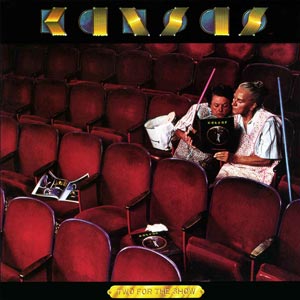 Two for the Show

About the album artwork: I came up with that because I was a Norman Rockwell fan. I showed it to the guys and said, “What if we take all of these playbills out and put in Kansas programs and stuff.” [-Phil Ehart]
Coming up with ideas was one thing, but making them happen was another. Tom Drennon made them happen. He had to re-shoot that Rockwell cover. He had to find women that looked like that. He found the theater OK, and he made it look great and he had the woman on the left picked out, but he couldn’t find the woman on the right. He came to me and said, “This shoot is killing me. I’m in L.A., the casting center of the world and I can’t find the woman on the right.” Finally, he called and said, “I found the woman on the right; my mother.” I said, “Your mom?” He said, “I looked at her one day, and I pulled her hair back and I said, ‘This is the woman!’”
"He worked his ass off on that cover, and he won an award from the Norman Rockwell Association. They presented him with The Most Realistic Reenactment of a Rockwell Painting. That cover won a lot of design awards. I was a Rockwell fan and I had the lithograph of the painting titled “The Charwoman.” I looked at that and thought, “Man, that would be a great live album. Those two women are cleaning up the theater after the live show.” Everyone liked the idea and Tom made it happen. He really deserves a ton of the credit for those Kansas albums because a lot of ideas were thrown at him and he was able to make them a reality." 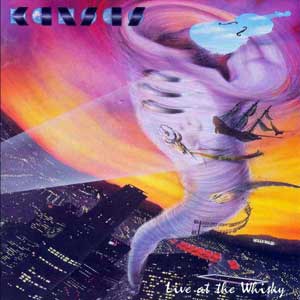 Live at the Whisky

Down the Road Lonely Street 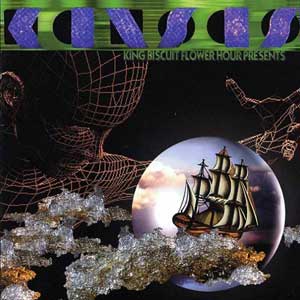 All I Wanted The Preacher 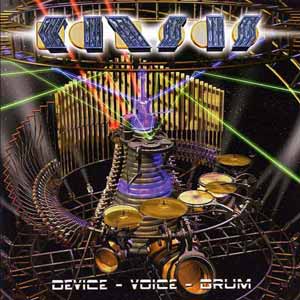 Belexes Dust in the Wind 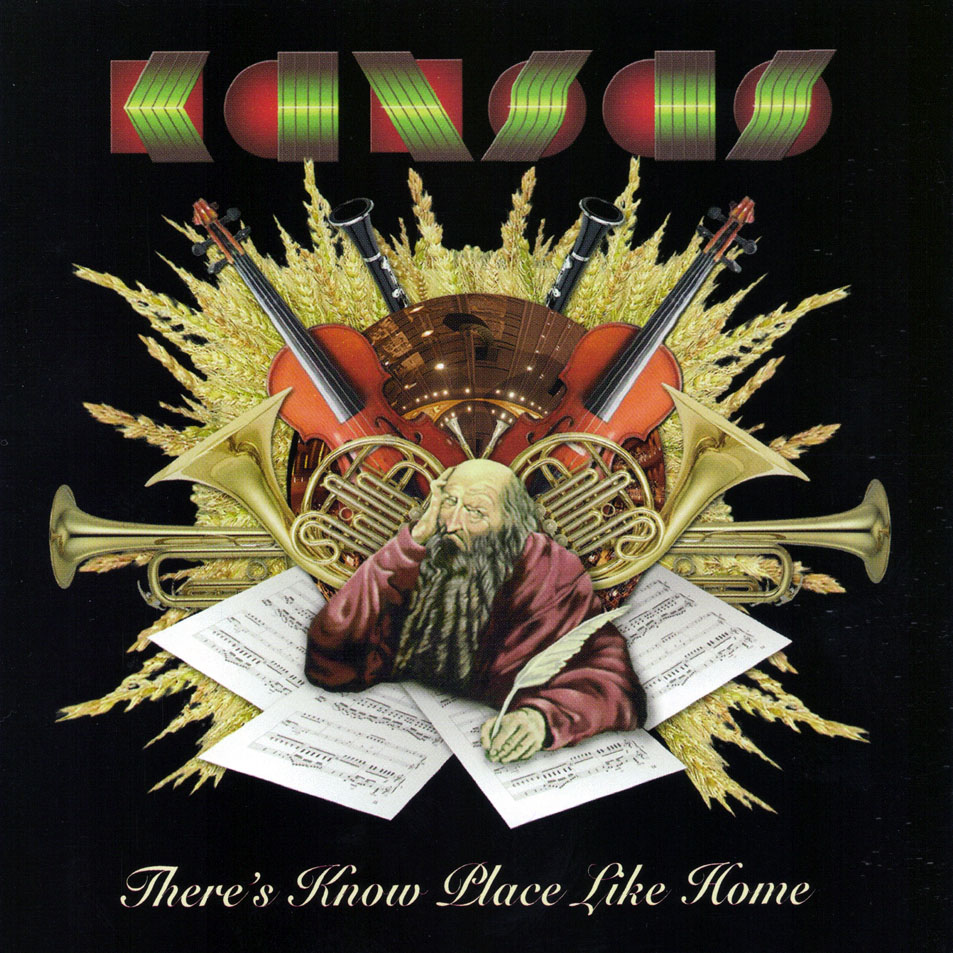 Miracles Out of Nowhere Down the Road Musicatto 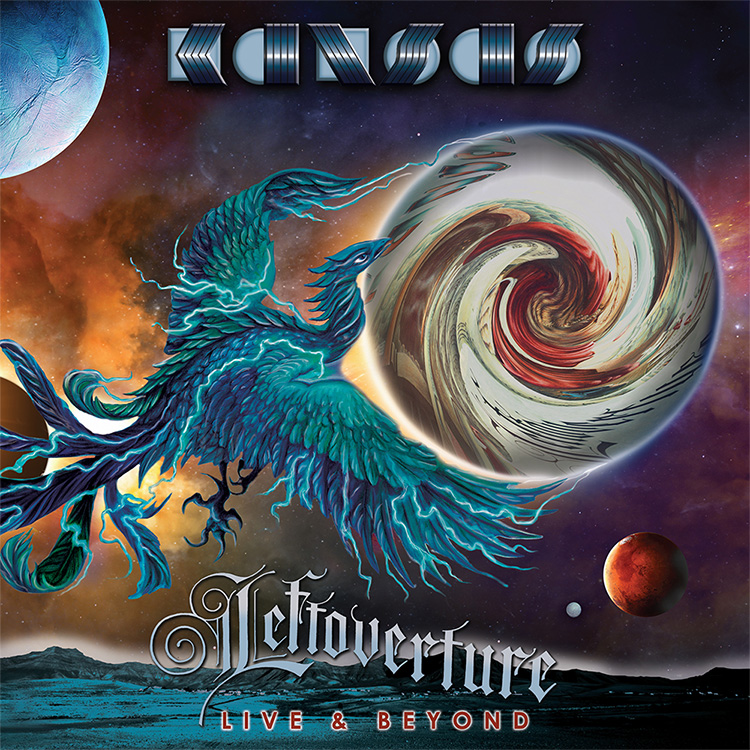 About the album artwork: Cover and Design by Creative Edge, Christine Boyd. 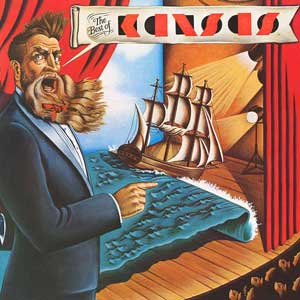 The Best of Kansas

About the album artwork: The artwork was done by Steve Carver. The cover is noteworthy in that it contains elements of nearly all previous Kansas album covers. 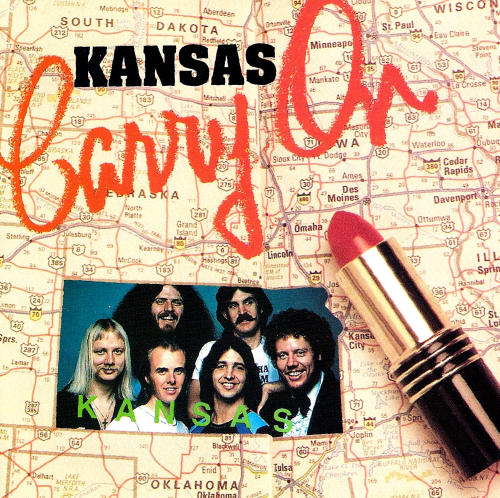 About the album artwork: “I saw that at a truck stop and about had a heart attack. I run from that one like a dog on fire; I just take off. I had nothing to do with that one; that was done without anyone in the band’s permission, or knowledge." 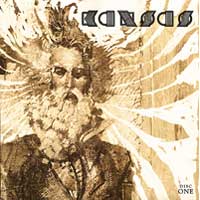 2004
Sail On: The 30th Anniversary Collection 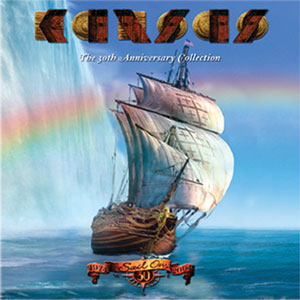 Sail On: The 30th Anniversary Collection

Got To Rock POn What's On My Mind 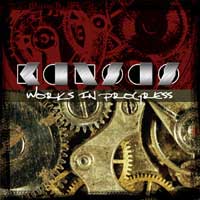 Under the Knife Cheyenne Anthem 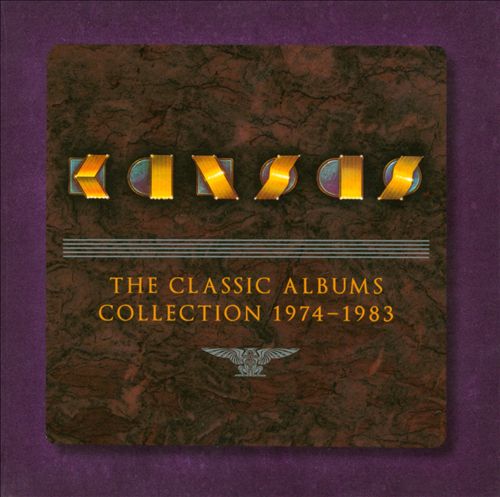 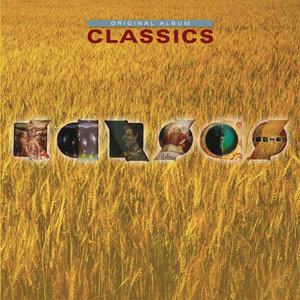