The band KANSAS is excited to announce the addition of guitarist Zak Rizvi as its newest member.

While new to KANSAS’s on stage lineup, Rizvi is not new to working with the band.  His relationship with KANSAS goes back almost 20 years when his band 4front opened for KANSAS.  Zak went on to work alongside producer Jeff Glixman on various KANSAS projects, including “There’s Know Place Like Home,” as well as the Native Window album, a project of KANSAS’s Phil Ehart, Billy Greer, David Ragsdale, and Richard Williams.  This led to KANSAS asking Rizvi to co-produce the band’s upcoming album, “The Prelude Implicit.” 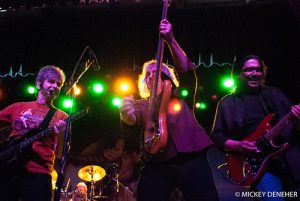 “Zak goes back a long way with the band, to a time when he relentlessly chased me down via fax machine to pitch song ideas,” explains KANSAS drummer Phil Ehart.   “As we were all working together on the new album, it was obvious to us that he was a natural fit for KANSAS.   Richard and I turned to each other and questioned, ‘Why isn’t he in this band?’  After discussing it with the other guys, Zak and I took a walk together in the studio parking lot, and I invited him to join.  Zak accepted.  He’s a good friend, an incredible person, guitarist, and songwriter, and we are happy to have him aboard.”

“I’m really thankful and excited for this opportunity,” commented Rizvi. “Having a long history of working with the band and Jeff Glixman, I really look forward to adding to the legacy of the band.  KANSAS has a very high musical standard, and as member of the band, I plan to maintain that standard for the band and the fans.”

Guitarist Richard Williams adds, “It’s been a very long time since the band has had two full time guitarists.  It’s really exciting to get back to that and what Zak will add to the live sound.  He’s a very talented guitarist, and what he contributed to “The Prelude Implicit” is nothing short of remarkable.”

Rizvi’s first performance with KANSAS will be May 12 in Bowling Green, KY.